Today, smartphones have evolved a lot in technology and features and smartphones does a lot of our daily work apart from the normal phone calls. The hardware part of smartphones have also changed a lot in recent years with high end camera and processor which have multiple cores to do the job. Samsung introduced the Galaxy S4 with Octa-core processor (8- cores). But one of the main problems with high end hardware is that it has a big impact on the battery life of the phone. These high end processors drain out your battery with normal usage and on top of this you have the custom software from phone manufacturers.

Although there are many free apps to improve the battery life, they cannot improve it beyond a certain limit. Quad Core Manager+ is a new app for your Android phones which is an ultimate solution for battery saving. Quad Core Manager+ is an app to give you control over your cores of your processors. QCM+ allows you to turn off/on your cores at will and this it will help you save a lot of battery.

The app will require root access, so if you do not have a rooted phone, do not waste time installing this app.

So if you are facing issues with your quad core phone eating up the battery, try this app and see if it makes a difference. 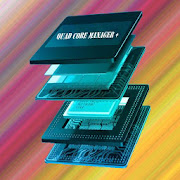 Get iOS7 Theme for Android
What’s New in Android 4.3