Android is now the most popular smartphone OS with a huge market share and we see lots of devices getting launched every day across the world. Google has been improving Android and the latest version of Android N was recently announced with new features and also improvements to existing features. 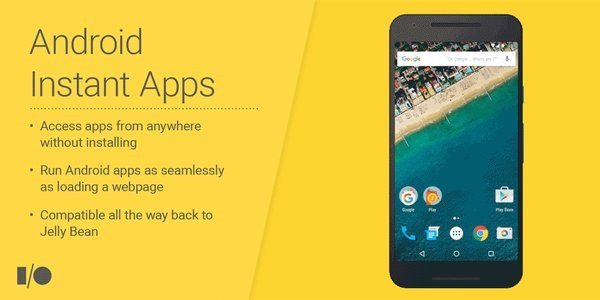 What is Android Instant Apps?

Android Instant Apps is a new feature which lets you experience beautiful and immersive apps, with material design and smooth animations, without installing them on your device. For example, if you click a link, it loads the website instantly. But if there is an app required for the website, you need to install it before you can preview it.

To change this Google is bringing Instant Apps. So with this feature, if a link you are clicking has an instant app associated, it will automatically open the tiny version of the app instead of the website. So basically with Instant apps, developers can associate a certain website with apps and they are loaded without having to install them.

Google says that instant apps will load even faster than websites because developers can modularize the app so that the app can load only what is requested.

You can see in the image above, a link in WhatsApp which refers to BuzzFeed is opened as an app instead of the BuzzFeed website. This provides a better user experience as the app provides a richer experience than browsing a website.

Initially, this would be available only to few developers like BuzzFeed, B&H Photo, Medium, Hotel Tonight, Zumper and Disney. But this feature will be available later this year.

Android Instant Apps can work on Android devices running Android 4.1+ (API Level 16) or higher with Google Play services. Developers do not have to create a new app, this can be implemented in the existing app. Android Instant Apps functionality is an upgrade to your existing Android app, not a new, separate app. It’s the same Android APIs, the same project, the same source code.

As mentioned earlier, developers can modularize the app and Google Play downloads only the parts that are needed, on the fly. Developers publish their Instant Apps through the Google Play Developer Console, similar to their existing Android apps.

Each year, new premium smartphones are launched by various mobile OEMs including Apple. So if ...
By Nirmal
7 hours ago

Android is the most popular OS for smartphones and used widely. If you are using ...
By Nirmal
18 hours ago