Honor 8 is the latest flagship device from Huawei under the Honor branding in India. The Honor 8 is the successor of Honor 7 which was launched last year. The new Honor 8 comes with lots of changes compared to predecessor and packs the dual camera set up along with 5.2 inch display.

The Honor 8 packs a Kirin 950 Octa core processor coupled with 4GB RAM and 32GB storage. So how does the phone perform? Let’s check out the detailed review of the device.

The first time you see the Honor 8, you will know that it is a beautiful device with great design. It has a metallic chassis with front and rear panel finished in glass. It isn’t vastly different from P9, but it does make a style statement in the looks. The front and rear panel has 2.5D glass which means it is prone to fingerprints and you might end up cleaning it quite often.

At 7.5mm thickness and 153gms in weight, Honor 8 definitely feels good in hands. The rear panel has the dual 12MP camera unit without any projections along with dual tone flash and Honor logo. Below the camera unit is the fingerprint scanner which also acts as the smart key (more on smart key in software section). The left side houses the SIM tray while the power and volume keys are on the right side. The bottom panel has USB C type port, speaker unit and the 3.5mm audio port. The top panel has the IR blaster and secondary microphone.

The front panel has 5.3 inch display, front camera, earpiece and the Honor logo at the bottom. The navigational buttons are on screen. Overall, the device feels premium and it is a great experience to use the phone with the compact form factor. 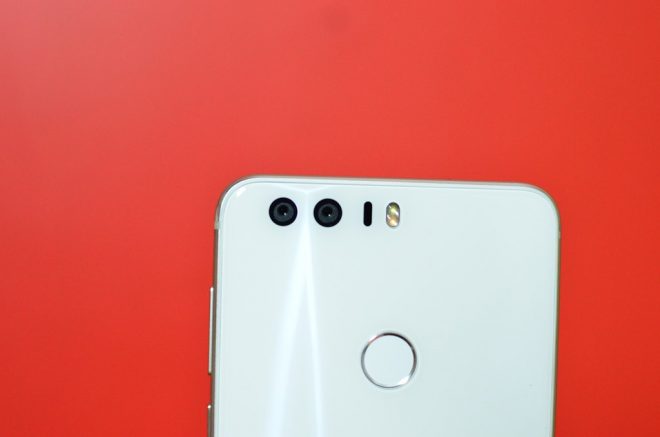 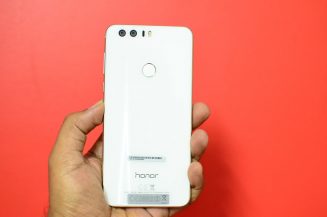 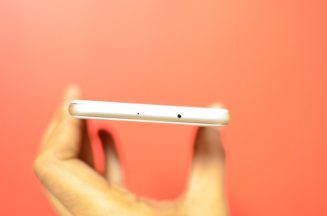 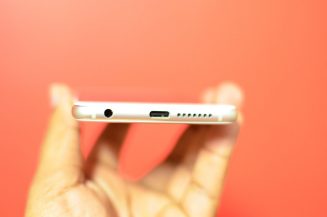 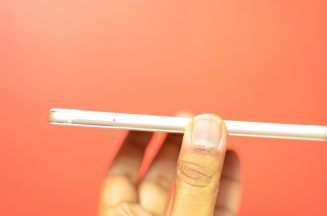 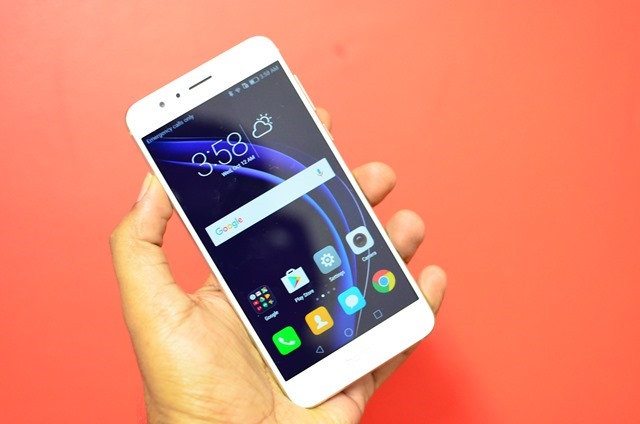 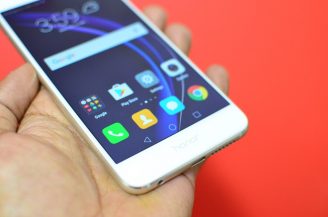 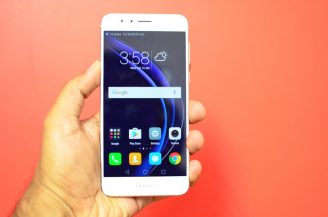 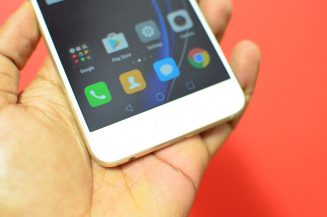 Honor 8 packs a 5.2 inch Full HD (1080p) display with 423ppi. It has the IPS LTPS panel which promises deep black and high color gamut. There is also 2.5D curved glass on the display but there is no protection offered on the display which is quite surprising. The display color quality is very good and it is vivid in nature. But the auto brightness sensor isn’t accurate and cause some issues. There is also option to change the display color temperature from the settings.

The sunlight legibility of the device is also good and so is the touch response. Overall, the display quality of Honor 8 is very good and won’t disappoint you.

Honor 8 runs on Android 6.0.1 Marshmallow and on top of that we have the EMUI 4.1. When we reviewed the Honor 5c with EMUI 4.1 we mentioned that the company has done a lot of work in optimizing the heavy UI. The EMUI offers lots of added features and tools. It comes with multiple home screens devoid of an app drawer with custom settings and notification panel. It is definitely one of those UIs which offers lots of customization options.

You also get simpler home screen and smart assistance feature which brings in features like customizable navigational bar, floating dock, motion control, one handed UI, voice control, gloves mode and more. There are a plethora of options available in the EMUI. There are also a handful of pre-installed tools from Huawei.

The phone comes with themes support and once you have inserted the SIM card in the device you have the option to download themes from the store. You can also customize the themes to create your own theme with ringtones, icons, lock screen etc. The phone also comes with Magazine unlock option which serves a new wallpaper every time you switch on the display.

There is also a phone manager app which provides with options like phone accelerator, storage cleaner, call blocked, power saver, traffic manager, do not disturb, app lock and more. Finally, you can also customize the three on screen buttons but adding a new button or changing the position. Overall, the EMUI is a feature rich UI offering lots of additional options and it feels more refined with 4.1 and Android 6.0.

Honor 8 is powered by HiSilicon Kirin 950 Octa Core in house processor coupled with 4GB RAM. The Kirin 950 is similar to 955 which was available on the Huawei P9. The Kirin 950 features an octa-core CPU with four Cortex-A72 cores clocked at up to 2.3GHz and four Cortex-A53 cores ticking at up to 1.8GHz  and coupled with Mali-T880 MP4 GPU. There is 32GB on board storage which is expandable via micro SD card. The phone has close to 25GB of storage space in the first boot.

While the Kirin 950 is no match to the Snapdragon 820 available on Xiaomi Mi5 or the OnePlus 3, it is still one of the high end chipsets and the performance is very good. All the games we played on the device had great experience and no lag or issues were experienced when running the games in high graphics mode. The call quality of the device is also good, but unfortunately the Indian variant is single SIM card only which can be a deal breaker for many. There is micro SD card expansion slot which supports upto 128GB. The speaker performance was also quite decent. There is also no VoLTE support on Honor 8 as of now, but the company says that it will be rolled out as an update as the chipset supports VoLTE.

The fingerprint scanner located on the rear panel is also good and unlocks the device in quick time without any lags. Overall, we don’t have anything to complain in the performance of the device.

Similar to Huawei P9, the Honor 8 comes with dual cameras and both are 12MP sensor, one for RGB captures and second one for monochrome. But unlike the P9, there is no Leica branding and hence you won’t find the Vivid and smooth modes. There is also no monochrome mode on this camera app, but you can always use the black and white filter to get similar effects. The phone also comes with laser autofocus along with dual tone LED flash. But surprisingly, for a phone which is focusing on camera, OIS is missing.

The camera app is one of the best we have seen with lot of options and modes available. There are plethora of modes including monochrome, beauty mode, light painting, watermark, HDR, night shot, slow motion, video, panorama and time lapse. The Pro mode also allows you to make the best of the camera experience. The focusing with laser and PDAF works well and does the job very well.

Now, let’s have a look at the image quality. The daylight shots with the 12MP camera came out very good with great color quality and good dynamic range. The sharpness of the images were also good. The panorama captures are also good. The close up captures also have great detailing and have come out good. The low light captures also have plenty of detailing and have good color reproduction as well. Overall, it is one of the really good cameras we have tested in this price segment.

The phone packs an 8MP front facing shooter which is again really good. You get a host of options including beautify mode. The images from the front camera came out good with great colors and one of the best front cameras in this price segment. 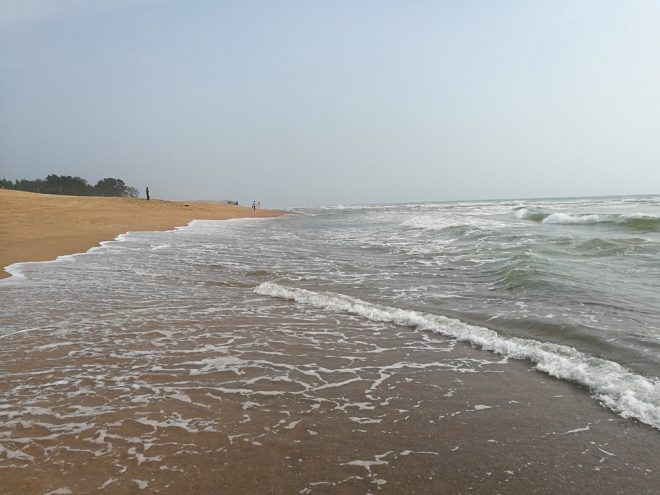 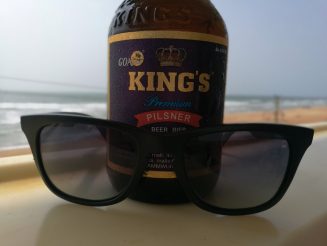 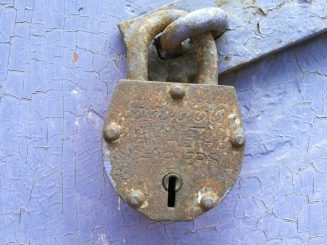 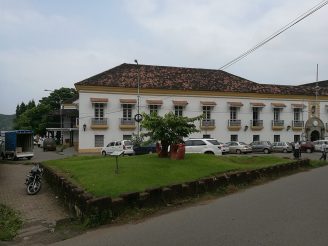 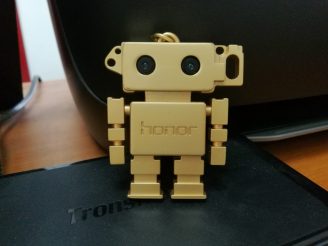 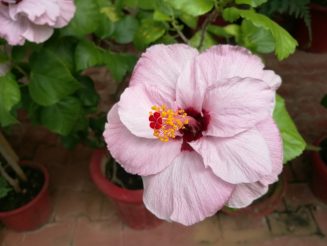 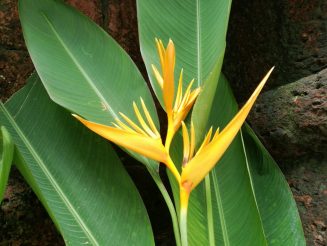 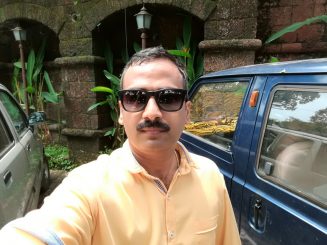 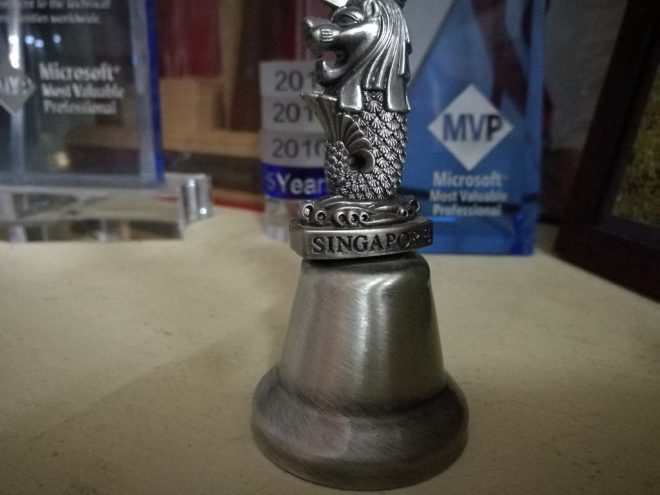 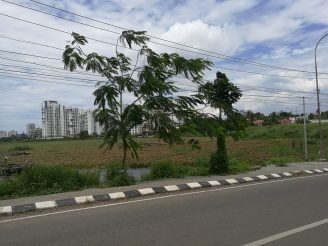 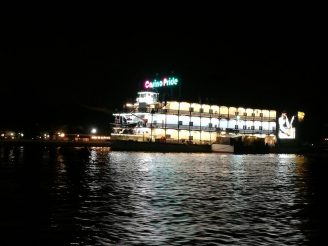 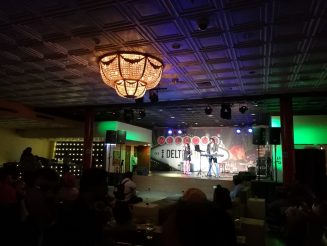 Honor 8 comes with a 3000mAh battery and the performance was quite decent. With moderate usage, you can get through a day of usage. Since the phone comes with only single SIM card support, the battery performance is quite decent. But unfortunately there is no quick or fast charging support in India. While the international variant has dual SIM and fast charging, it is quite surprising that Honor choose to remove these features in India.

Honor 8 offers an all round package with excellent design and build, superior display, excellent camera and performance. The device is priced Rs 29,999 and at this pricing it is a tough ask as there is OnePlus 3 which is priced Rs 27,999. But if you are looking for a premium device with great camera experience, Honor 8 will not disappoint you.

Continue Reading
Advertisement
You may also like...
Related Topics:Honor 6, Reviews