After launching the upgraded J7 (2016) variant back in May, the company has announced the new J7 Prime. The Samsung Galaxy J7 Prime comes as an upgrade to J7 (2016) and sports a full HD display and is powered by the same Exynos Octa Core 7870 processor with 3GB RAM and 16GB of storage. The phone also comes with 3300mAh battery, 13MP rear camera, and 8MP front camera along with Android 6.0.1 Marshmallow.

The phone is also the first to sport a fingerprint scanner in the J series. So how does the phone perform and is it worth the money? Let’s find out in this detailed review.

One of the main strengths of J7 Prime is the design. For the first time, Samsung has tried something new in the budget and mid-range segment in terms of the design. The Galaxy J7 Prime is an all metal phone with a unibody design. It has curved edges on the rear panel which gives a decent feel when using the phone. The rear panel has 13MP camera, LED flash and Samsung logo. The power button and the speaker unit is located on the right side. Samsung has given a new location for the speaker unit. The volume keys are on the left side along with two SIM/ micro SD card trays. The bottom section houses 3.5mm audio jack and micro USB charging slot.

The front panel has 2.5D curved glass with Gorilla glass protection and a 5.5 inch Full HD display, front 8MP camera and the sensors. There is also physical home button integrated with a fingerprint scanner and two capacitive touch buttons. The buttons are not backlit and do not offer any haptic feedback. J7 Prime also misses out on many important sensors including the ambient light sensor. Overall, the phone design and build is a step ahead when you compare with previous J series phones, but it still does not match up with the competition. 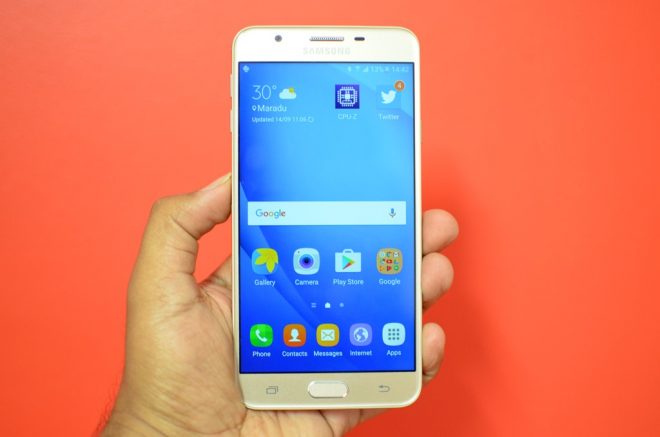 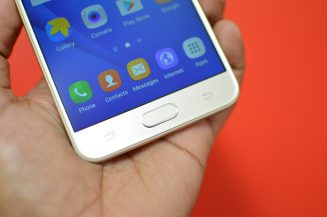 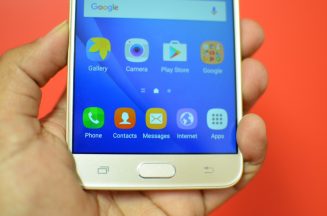 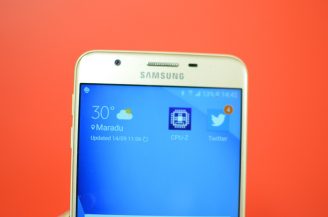 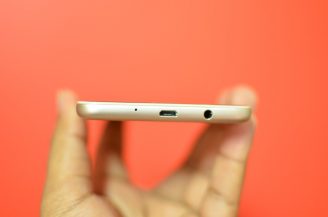 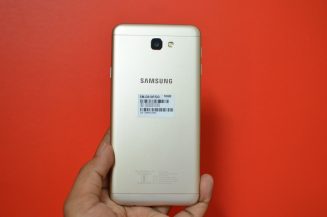 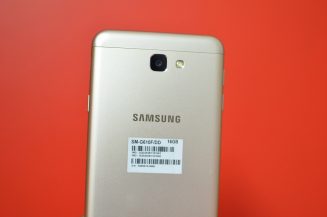 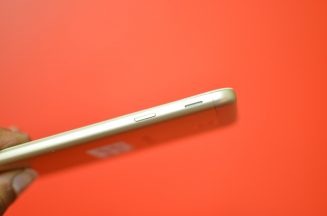 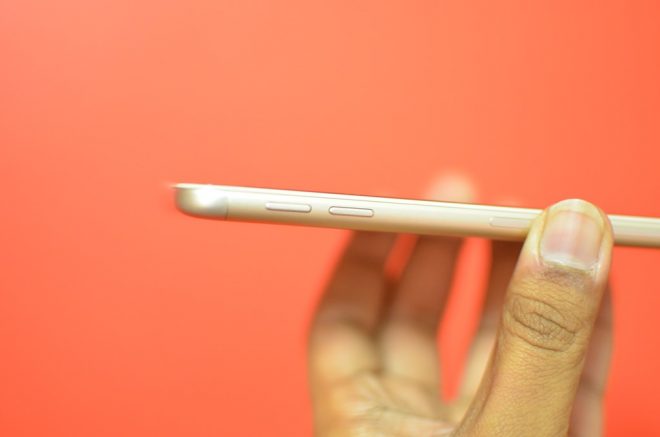 Samsung has upped the display resolution on the J7 Prime and it now comes with the Full HD (1080p) panel. But unlike other J series phones, Samsung has used a TFT panel instead of AMOLED. The display isn’t as vibrant as the AMOLED panel, but nevertheless, it offers decent colors and viewing angles. The touch response is also quite good, but it again misses out on ambient light sensors. This means you have to use the outdoor mode in the device when you step out.

The phone comes with 2.5D curved Gorilla Glass and the first device in the J series to come with added protection for the display.

Samsung Galaxy J7 Prime comes with Android 6.0.1 Marshmallow out of the box with the company’s TouchWiz UI. Samsung has optimized the UI for Marshmallow with some changes to the notification center as well. The quick toggles section has been redesigned with a lighter color. Samsung has also included few apps like S Health, File Manager, S Planner, Opera Max and also Microsoft Office suite.

There is also room for customization with the My Themes app where you can download additional themes. The Settings panel looks more or less similar to the previous version. There is also one handed mode which reduces the screen size to make it easy for use.

Similar to the Samsung Galaxy J3, the new J7 Prime also comes with S bike Mode which is a do not disturb feature for bikers. You can enable it from the notification section. More details on S Bike mode can be found here.

The Samsung Galaxy J7 runs on Exynos Octa Core Processor clocked at 1.6Ghz and coupled with 3GB RAM. When we tested the 2016 J7 variant, we mentioned that the J7 had good overall performance, the same goes with the new J7 Prime as well. The overall performance of the device was good and we didn’t experience any lags or issues while running apps or switching between apps. But unlike the J7, the J7 Prime has poor gaming experience. We tested few heavy graphic rich games and it was laggy experience and Samsung’s change from HD to Full HD display on the J7 Prime has not been optimized. The heat generated while playing games was considerably low but Samsung has missed the boat here with poor optimization.

Multi-tasking was very smooth on the phone, we ran multiple apps in the background including games and there was close to 1.5GB of RAM available.

The phone supports 4G LTE, and we achieved good speeds when we tested in our location. The call quality on the phone was decent and we didn’t notice any issues with calls. The speaker output was quite decent and the placement of the speaker is unique as it is placed near the power button. The phone comes with 16GB of internal storage and out of which close to 11.0GB was available in first boot. You can expand the storage via micro SD card. For a phone priced close to 20k, 16GB of storage is quite disappointing as most of the phones are now making 32GB as standard.

Now coming to the camera samples, the daylight photos taken with the phone was quite decent. But the biggest issue is the lack of consistency in colors. At times we got good colors, but some of the photos had washed out colors and not the accurate ones.

Since the phone does not come with PDAF, it does take some time to lock the focus. So it might not be the fastest camera out in the segment. Coming to the indoor shots (or low light), it does have decent clarity and manages to produce shots without much noise. Although noise creeps in, the levels are acceptable for a mid-range phone. to  The phone can record videos in 1080P and the quality is again decent. The front facing camera is quite decent for selfies. Here are some of the samples taken with the device. 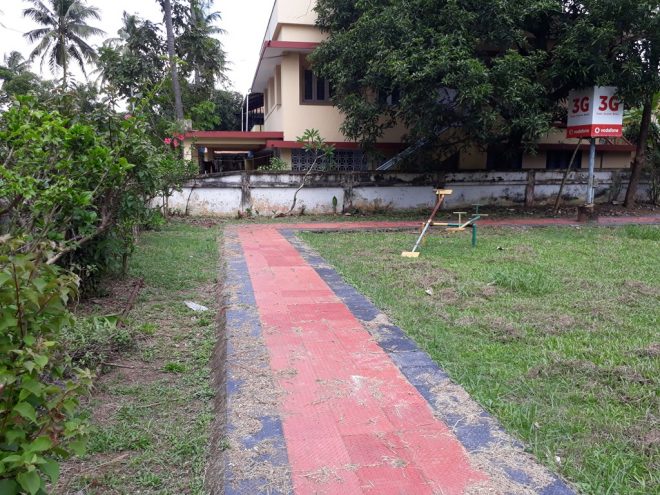 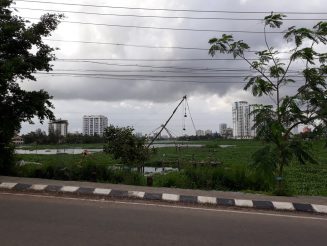 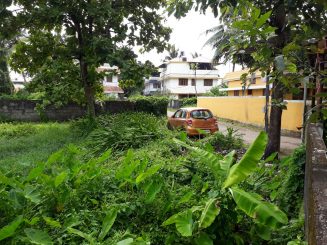 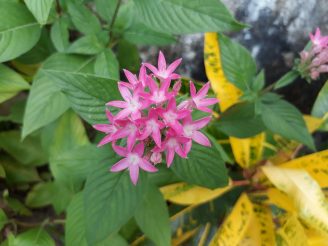 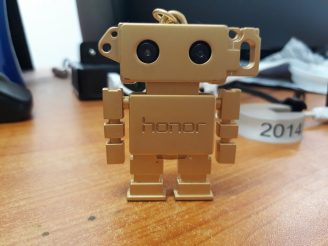 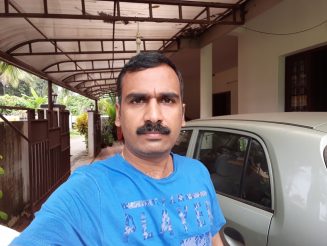 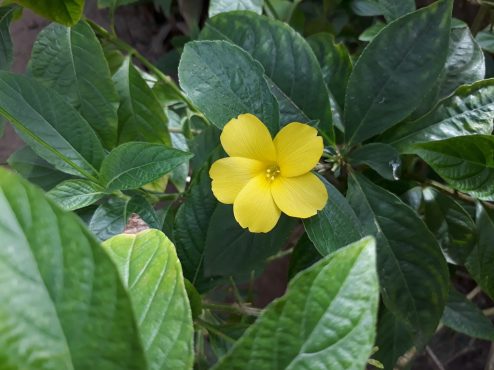 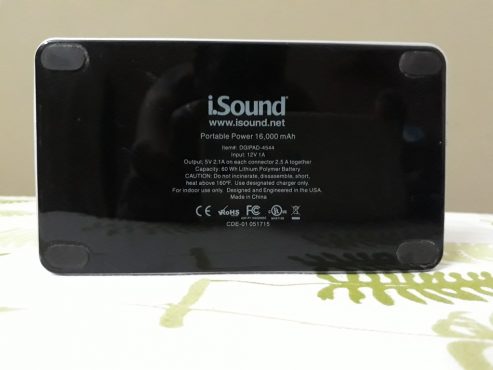 Apart from this, you also have power saving mode and ultra power saving mode included. You can also reserve battery for calls which mean once the set threshold is reached, the phone can be only used for making and receiving calls.

So how good is the Samsung Galaxy J7 Prime for Rs 18700 (approx retail pricing)? J7 Prime is definitely a good upgrade over J7 (2016) with Full HD display, metal body, fingerprint scanner and more. But J7 Prime still misses out on some of the basic sensors in this price segment. Also, the gaming performance was poor and camera quality is strictly average. At Rs 18,700, it is still tough to recommend this device over competition like ASUS Zenfone 3 (priced Rs 21,999) or even offerings like Redmi Note 3 or Le 2 which are priced almost 6-7k cheaper than J7 Prime. But if you are in the market for a Samsung phone for less than 20k, then J7 prime makes sense.