Back in August, Samsung had announced the new Galaxy Note 5. Samsung has had great success with the Note series ever since it was launched and the company is looking to keep the success going with Galaxy Note 5. The Note 5 comes with impressive spec sheet and it is indeed the best Note till date. It features a 5.7-inch Quad HD (2560×1440) Super AMOLED display. It is powered by Samsung LSI Exynos 7420 Octa core processor (4xA57 @ 2.1GHz and 4xA53 @ 1.5GHz) and Mali T760 GPU.

Design wise, the Samsung Galaxy Note 5 has striking similarities with the Galaxy S6. Samsung has retained the popular design of Galaxy S6 on to Note 5 as well. The bezels are pretty slim and has straight sides and flat front. But the rear panel has a curved finishing towards the edges similar to the front panel of Edge+. The rear panel is glossy and is a fingerprint magnet and is made of glass. Since the edges are curved, the phone is slim towards the edges and is easy to hold, but at the same time it is also a bit slippery.

The phone is made of aluminium and has Corning Gorilla glass 4 protection and feels premium. Even though it is a 5.7 inch device, it does not feel as bulky as the Note 4. The rear panel is non removable and houses the 16MP rear camera and a cluster with the LED flash and heart rate sensor. The Nano-SIM tray is placed on the top while the 3.5mm audio socket, micro-USB port, speaker grille and the S Pen silo are all on the bottom.

Removing the S Pen is more easy with the push mechanism, instead of pulling it out using fingernails. The power button is on the right side while the volume keys are placed on left side. The front panel has the three buttons including the physical home button which also acts as the fingerprint sensor.

Overall, the device looks great in hands with premium look and feel. 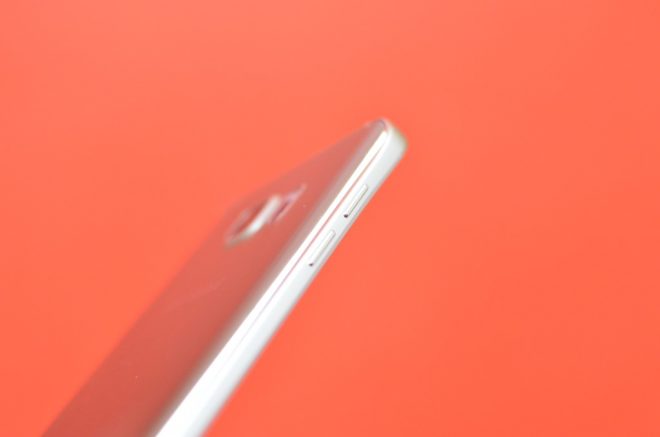 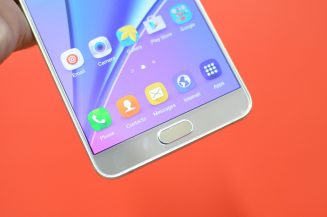 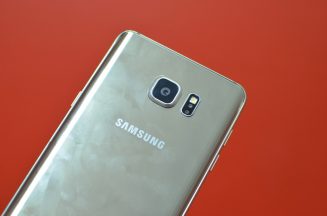 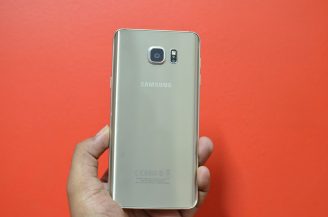 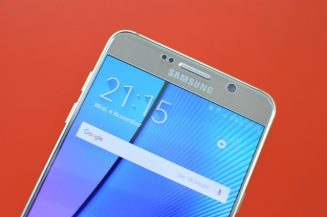 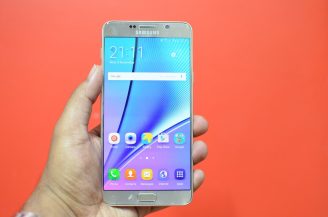 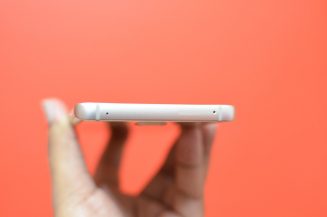 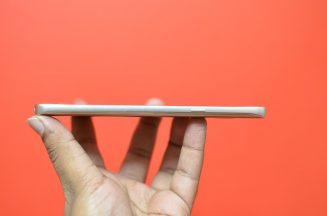 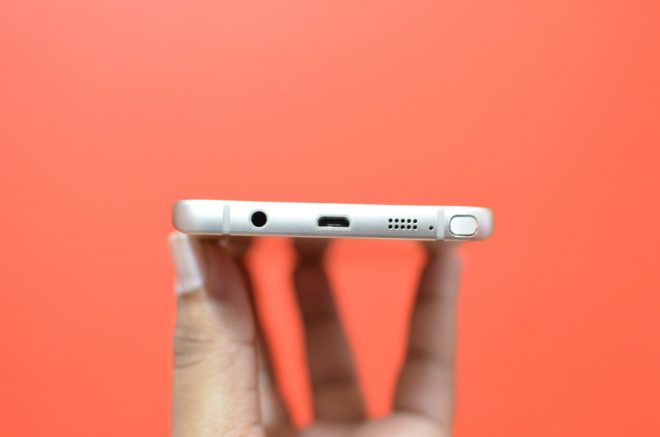 The Galaxy Note 5 comes with a 5.7 inch Quad HD SUPER AMOLED display with 2,560×1,440-pixel resolution (515 pixels per inch) and it feels brilliant to use. The colors are excellent and so is the touch response. It is joy using the sharp and vivid display. The sunlight readability is also very good. Overall, it is one of the best displays out there on a premium smartphone.

The Samsung Galaxy Note 5 runs Android 5.1.1 Lollipop with company’s custom touchwiz UI which is found on almost all Samsung phones. There aren’t too many changes to the touchwiz on the Note 5 and looks more or less similar to other Samsung phones. It has the custom notification center with quick toggles which can also be customized.

The UI features an app drawer unlike many others which have multiple home screens. You can also sort the app list based on alphabetical order.

As soon as you pull out the S Pen you get to see the commands on screen which includes Action Memo, Smart Select, S Note and Screen Write. These options allows you to take notes and also capture screenshots and you can share them easily. You can also add up to three additional stylus-friendly apps to Air Command for quicker access.

The settings panel is custom one with the options grouped for easy access.

The speaker performance is also pretty good and the output was clear. The call quality of the device was also very good and we faced no issues using it. The phone comes with 32GB of storage, out of which 25GB is available to user in the first boot. There is no micro SD card support on this device, but the phone does support USB OTG out of the box and you can connect your pen drives.

The Samsung Galaxy Note 5 comes with 16MP rear camera and a 5MP front camera. The rear camera is capable of 4k video recording and you can double press home button to quickly launch it. The interface is similar to other Samsung phones with plethora of options including manual mode, filters and more.

The Note 5 here has optical image stabilization (OIS) and also auto HDR among other modes. There is also a new is a live broadcasting feature that lets you record to YouTube.

The Note 5 camera produces great images with plenty of details and accurate colors most of the time. The auto HDR also works brilliantly. The low light performance was also pretty good. The front facing camera also works very well. There is 4K Ultra HD recording,  which is 3,840×2,160-pixel resolution. Here are some of the samples taken with the device. 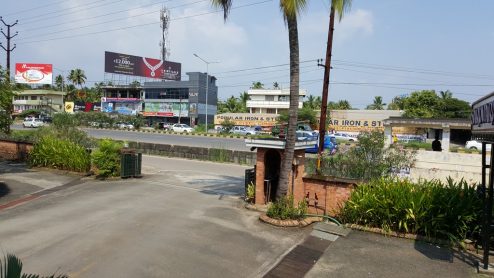 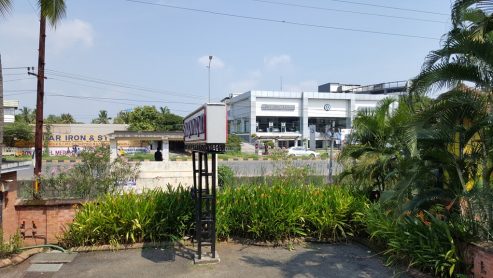 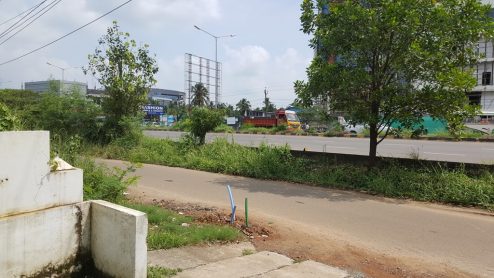 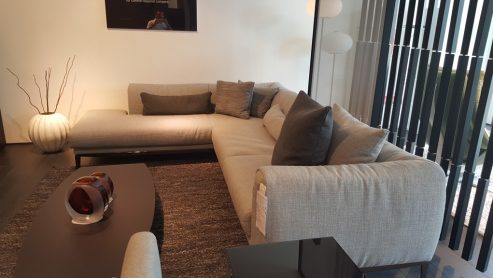 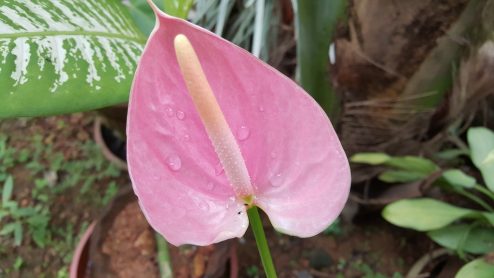 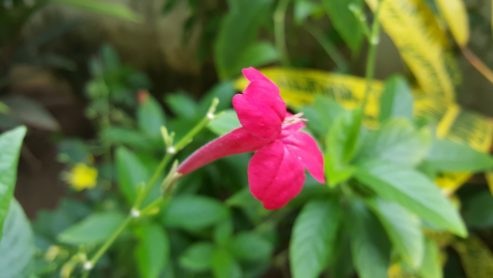 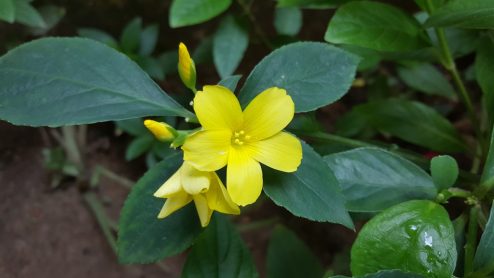 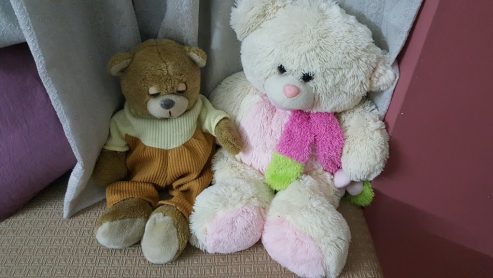 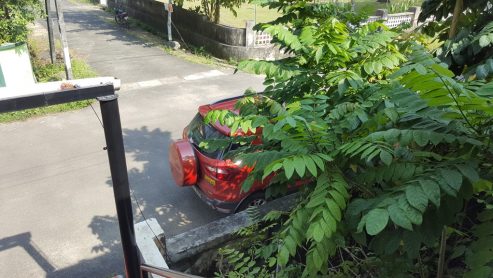 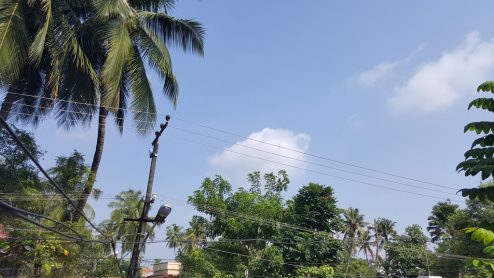 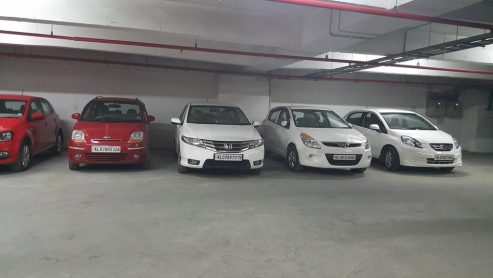 The Note 5 packs a 3000mAh battery which is slightly lower than 3200 on the previous generation device.The battery performance was just decent on the device and will last for a day on moderate usage on 4G LTE network. The phone also comes with power saving and ultra power saving modes to get additional battery life.

Priced at Rs 53,900 for the 32GB variant, the Samsung Galaxy Note 5 comes at a premium pricing, but comparing the iPhone 6S Plus price, the Note 5 looks much more value for money. If you are looking to invest in a premium high end smartphone, the Note 5 is a good choice with great design and build, excellent display and camera.